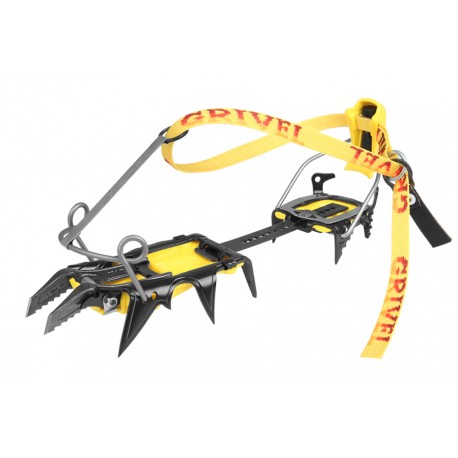 An evolution of the species. Our G14 crampons combine the technical performance of forged, vertical frontpoints with the low profile, collapsible frame of the G-12 to make an altogether fresh, modular, and customizable crampon suited to many climbing disciplines.

An evolution of the species.
Our G14 crampons combine the technical performance of forged, vertical frontpoints with the low profile, collapsible frame of the G-12 to make an altogether fresh, modular, and customizable crampon suited to many climbing disciplines.
Our success and experience with the Rambo crampons reinforces the efficiency of forged points: they penetrate hard ice better, with less vibration, and offer the opportunity to combine vertical and horizontal axis.
Front points are simple to configure on the G14, allowing the user to build mono or dual point crampons and replace worn points easily. The low profile of the crampon frame places the climber´s foot closer to rock or ice, and is less prone to balling up. At last, alpine climbing crampons with the technical performance of their ice and modern mixed counterparts. The G14 crampon is delivered with the Antibott included.

Cramp-O-Matic:
A well known system which relies on a nylon speed lever in the rear and a stainless steel front bale to hold the boot. Quick to put on, these bindings are perfect for plastic mountaineering boots that have a rigid sole and substantial heel and toe welts. The stainless steel safety strap, which was invented by Grivel, is permanently mounted on the front bale and prevents total loss of the crampon should it be forced off the boot.

New-Matic:
An evolution of the Cramp-O-Matic system which utilises the C-O-M rear bale and lever. The plastic harness system is hinged from two front posts which retain the boot securely even if it has a shallow, worn front welt or overboots are being used. It is a simple and efficient binding, being far more versatile than the original Cramp-O-Matic style. Made in dual-component plastic: the black part is stronger, bearing the strain whilst the yellow part is softer, increasing adherence to the boot. The harness is made from the strongest, most durable plastic available -Zytel DuPont, which was developed for the manufacture of alpine ski bindings. Obviously it cannot last forever, so please, after long and severe use replace the harness the same way you would resole trekking boots or rock climbing shoes.
Grivel suggested cramons G14 use of the performance of the terrain and the running activity labeled E, F, G and H.

11 other products in the same category: